Managing overall role capabilities can be done by an administrator using Administration > Site administration > Users > Permissions > Define roles. This is the place to add custom roles or modify existing roles. The “Manage roles” tab, allows the system administrator to edit any one of over 350 different capabilities associated with any role. The “Allow role assignments”, “Allow role overrides” and “Allow role switches” contain a matrix which give the ability for a specific role to work with other specific roles.

The ‘Manage roles’ tab contains a list of roles on your site. The edit column contains icons for editing, deleting roles and copying roles, and for moving them up or down in the list (affecting the way that roles are listed around Moodle).

To edit a role:

See Creating custom roles for information about adding a new role and creating a duplicate role.

If a standard role name or description is empty Moodle uses a default string from the current language pack. Custom roles can be customised using multilang syntax.

You may also override the role names separately in each course.

To reset a role back to the default permissions:

The “Allow role assignments” tab allows (or does not allow) a specific role to be able to assign specific roles to a user. 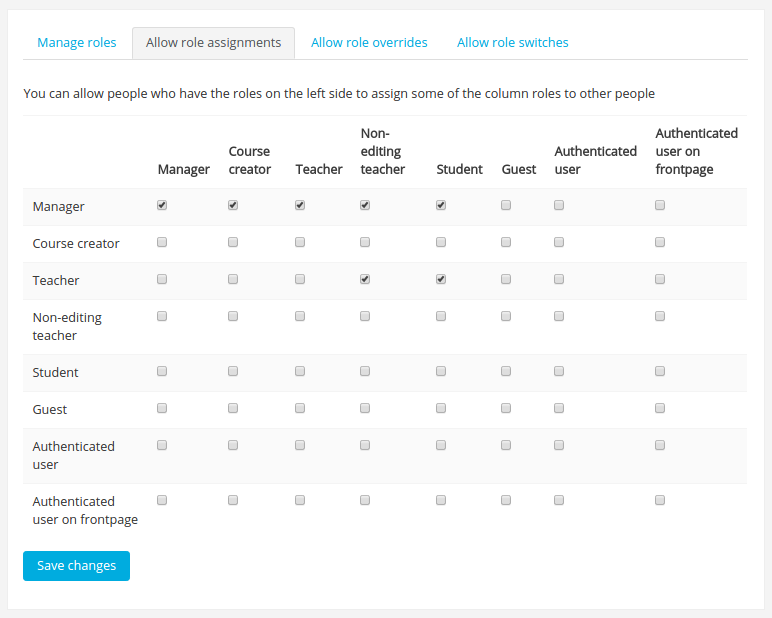 Enabling teachers to assign other teachers

By default, teachers can only assign other users the roles of non-editing teachers, students and guests. If you want teachers to be able to assign other teachers in their course, you can allow the role assignment:

Note that the settings only apply to roles that have the capabilities moodle/role:override or moodle/role:safeoverride allowed.

The “Allow role switches” tab allows (or does not allow) a specific role to be able to temporarily change their role to another specific role. For example, this might allow a users assigned to a custom role in a course to see “Student” in the Settings > Switch role list.

Note: the selected role must also have the moodle/role:switchroles capability to be able to switch.