Overrides are specific permissions designed to override a role in a specific context, allowing you to “tweak” your permissions as required.

Overrides may be used to “open up” areas by giving users extra permissions. For example, an override may be used to enable students to rate forum posts (see Forum settings for details).

Overrides may also be used to prevent actions, such as starting new discussions in an archived forum. 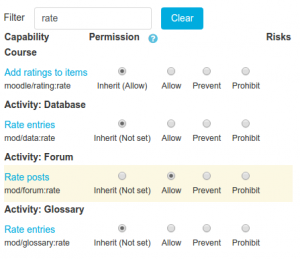 There are four settings for each permission capability:

Inherit
The default setting. If a capability is set to inherit, the user’s permissions remain the same as they are in a less specific context, or another role where the capability is defined. For example, if a student is allowed to attempt quiz questions at the course level, their role in a specific quiz will inherit this setting. Ultimately, if permission is never allowed at any level, then the user will have no permission for that capability.

Allow
This enables a user to use a capability in a given context. This permission applies for the context that the role gets assigned plus all lower contexts. For example, if a user is assigned the role of student in a course, they will be able to start new discussions in all forums in that course (unless a forum contains an override with a prevent or prohibit value for the capability).

Prevent
By choosing this you are removing permission for this capability (only for this role), even if the users with this role were allowed that permission in a higher context. If any other role allows the same capability, even for a higher or lower context, this prevent will have no effect.

Prohibit
This is rarely needed, but occasionally you might want to completely deny permissions to a role in a way that can NOT be overridden at any lower context. An example of when you might need this is when an admin wants to prohibit one person from starting new discussions in any forum on the whole system. In this case they can create a role with that capability set to “Prohibit” and then assign it to that user in the system context.

Permissions at a “lower” context will generally override anything at a “higher” context (this applies to overrides and assigned roles). The exception is PROHIBIT which can not be overridden at lower levels.

If two roles are assigned to a person in any context, one with ALLOW and one with PREVENT, then ALLOW will win.

Note that the guest user account will generally be prevented from posting content (eg forums, calendar entries, blogs) even if it is given the capability to do so.

The default manager role has the capability moodle/role:override allowed, and can override permissions for all other roles.

The default teacher role has the capability moodle/role:safeoverride allowed, and can override permissions for the roles of non-editing teacher, student and guest.

If preferred, a new role for overriding permissions may be created and selected non-editing teachers assigned to it.

Sometimes a teacher will want to over ride permissions for selected students. Typically they will assign a student a role locally. For example, assign a student as a non-editing teacher. However, managers can override specific permission in a role. This does not create a new role. It modifies an existing specific role and affects all users assigned to that role in the context.